Coming soon the 2nd of the Enigma Front anthologies - it's already listed on Amazon but not available yet (the launch is on the 12th of August 2016) - with short stories from 21 authors including a Hugo and Nebula winner.  It contains my 2nd published short story, "Slayer's Revenge", about a dragon hunter looking for payback. If you are going to When Words Collide 2016, it will be available in paperback, or as an ebook or print copy from Amazon. 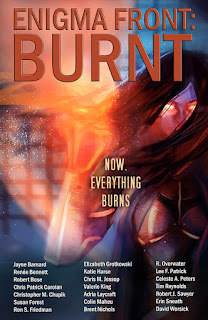 "...the rash of home renovation or cooking or talent shows has empowered a whole generation to truly believe that, if the put their mind to it they can appear as gifted as any so-called specialist."

(Globe and Mail, Sat 16, Jul 2016, Songs in the key of life). While true, something about the statement bugged me, so I mulled it over while walked to stampede breakfast. I came to the conclusion that the phrase "so-called specialist" was the problem. The relationship we have with the notion of expertise and specialists is skewed. Some specialists aren't.  However, others most certainly are skilled experts.  The former doesn't (shouldn't) subtract from the latter.  Some would say that if you aren't a specialist, you can't do that task. That is wrong. Others say that anyone (almost) can do that task, so specialism is useless or even elitist. That is wrong. The truth is in the middle.

The book reviewed was about human limitations - in particular amusia - but the quoted sentence highlights our relationship with experts and specialists. Ignoring the very real limitations of our own bodies that the review and book focussed on, it's not that we can't do anything. But we haven't. Specialists can do what they do because they have paid their dues - not in money, but in time, in practice. Sure, I can tile my bathroom floor, sing a song, shoot a basketball, and if I enjoy those activities then I will. But make no mistake, I can't do those as well as the specialist can, nor as quickly. I can become a specialist interior decorator, if I want to, but I haven't paid my dues yet - in practice. I haven't made the sacrifices needed to spend the 10,000 hours, or whatever other measure you wish to use. I've spent my time on physics (a decade+ of study and research), dance (ballroom and other styles) (most of my adult and teenage life), software (20+ years), writing (1.3+ million words) and a raft of hobbies. That's not to say I can't lay a tiled floor - I can - but I won't be as fast or as good as the expert. I would do my research, practice first, and even then, take the extra time to do a good job.

At a motivational speech given by a very successful local business owner (he started and owns a pizza chain) a few years ago, he pointed out that no one can be an expert in everything. His message was: choose your skills, focus on those, and find others with other skills to help each other.


We are all experts about something.

Don't deny your skills, but don't deny others theirs either.

An excellent speech about fantasy - and esp. faerie-tale based fantasy - by Terri Windling.  It's rather long, but well worth listening to.

As the speech progressed, I found myself thinking of my own writings in her terms, and they match well.  I've long maintained that the setting, natural and social, is one of my characters.  Indeed a friend said half a year ago that she thought I was a milieu writer, and others have since agreed. And that seems to me to be the heart of her message - the mystery of place, the ability to find oneself in the quest into the unknown lands.

Now, unlike her stated preference, I build no mystery into magic. I'm a scientist at heart and the magic in my worlds is as rationalistic as any science.  However, that being said, the consequences of that magic can be strange and bizarre, as mysterious as any other.  I see beauty and mystery, even the sublime, in Maxwell's equations of electromagnetism, in theoretical quantum mechanics, the shimmering northern lights, and yes, even in the understanding of how they come to entice.

Moreover, in all my stories I try to use the mystery of place, of the forest, of the ancient ruins, the vanishing mountain valley, even of the decaying concrete city.  Indeed, all my longer works are about people who are questing for a place in the world - their small haven, literal, spiritual or emotional, in the wide world of the unknown.

Ms. Windling also spoke of preferring the intimate fantasy - not the world-saving epic.  I concur on that basis also.  I also prefer to cast a bright light leaving shadows in the corners, and enjoy reading that type of story.

Having many dark shadows (either exciting or terrifying, or both) is easy in a short story that focusses on only one person for a few hours or days at most.  However in my first multi-novel sequence, David and Fiona - and yes, I much prefer the ensemble cast no matter how unpopular it might be today - are confined to one (admittedly large) island while they struggle to return home and journey to discover what home and life means to each.

Some writers giving advice to new writers say that the larger, the grander, is better.  I don't agree.  One of my goals was to create the sense that they are two dots in the much larger, and to them, unknown world.  They are insignificant except to themselves and their personal friends and foes.

On the other hand, my Tower stories start rather like Orwell's 1984, the brutality, the invasive technology augmented with mind-stripping magic.  However, during the arc of the stories, the world itself undertakes the quest back to towards the unspoiled rivers and large forests that Terri Windling spoke of desiring.  In each successive story, the focus narrows, either in place or in character while the mysterious dark margins grow and the remaining technology decays away.  So, that sense of loss she spoke of in LotR is there too (I hope), a longing for the old world. In this case the old world is the global pre-apocalyptic civilization, so it's a yearning that dark-ages Europe might have had for Rome.  Indeed, the Carolingian empire was one of my inspirations.

I hope my stories speak to modern life and our issues the way Terry Windling calls for us to create.  Among other things I write them to be about finding oneself, the power of community (for good and ill), depression, the need to belong, the need to be true to oneself, religious freedom, sexual identity, bigotry and racism, the dangers of the modern world (yes even in a fantasy setting), and the fear of death and insignificance.
Posted by Unknown at 14:19 No comments:

Magical Effects of Lightness and Flight

I was reviewing one of my stories the other day and reflecting on the behaviour of some drugs (potions).  It doesn't matter whether they are potions, spells, or other magical mechanisms, the effects would be the same.  The first was a drug that caused a person to weigh less.  Now, to be clear, the potion doesn't cause the person to lose mass, just weight.  This has many applications, for performers, dancers, acrobats, swimmers (it would be better than a life-jacket), medical evac, climbers (rope and mountain) and recreational uses (nudge, nudge).

However, such effects, when presented on screen (TV or movie) always seem fake.  I have realized why: landing speed and momentum.  Certainly a person jumping from a fixed height (say off a 15 ft wall) would hit the ground at a lower speed.  If we supposed that the spell reduced weight by 50% (which is substantial), then the impact speed would be reduced by 29%.   Only 29%.  The fall time would be increased by 41%, but that 29% is not much.

More importantly, if a person jumped and then landed on the same surface (like a figure skater, an gymnast, a dancer), the magic makes no difference to how hard they land.   Certainly, they rise further (about double - exactly double if one ignores the offset strength required to just stand) and can perform more spins, flips etc in the "hang-time" (41% increase) but, ignoring air resistance which is negligible for 50% weight reduction, they will land at the same speed they took off.  That means that if a dancer misses a landing from a leap, they will bruise just as badly with or without the drug.

The other effect is flight.  This is a staple of many a fantasy story (or game). Now, in a novel or short story, I don't want to see all (or any of) the following answered.  However, anyone who uses a flight spell will need to know the answers or suffer nasty consequences.  How does it work?  That is crucial.  Is that propelling you against the air or against the ground?  How long does it last?  How stable is the flight at top speed?  What about hitting birds insects, dust?  How do you protect your eyes?  Breathe? How fast (or soon) can the spell be recast?  What about take-off and landing angles?  Highest altitude?  Altitude sickness? What about climb rates? Stable descent rates? Accidents?  Running into trees?

Remember that even a 20 ft fall onto hard ground will kill most people most of the time (and that's not high enough to avoid running into trees).  Does your hero have special toughness to deal with that?  And I mean something magical because no Schwarzenegger-like toughness will save your hero from this kind of damage (nor will conventional armour).  This rips muscles, tears tendons, breaks bones from the deceleration and distortion, not from the surface "hit".  Sure, he's mentally tough, but flesh has a breaking point regardless of whether he is a book-worm or is Conan.

In a world that doesn't have trains, planes and cars, 15 mph is fast !  Not for us, but for them a galloping horse is the highest easily imagined speed and that tops out around 30 mhp.  Most birds can fly faster than that, but most generally don't.  Wind speeds over tall mountains can frequently reach 100 mph (and that's not storm conditions).  Even on the flat ground, storms of any significant strength reach 20 mph or even 30 mph (and that doesn't include gusts). Any wind capable of lifting a flag is 10 mph or more.  So what is the benefit of even a 30 mph flight spell?

Supposing 30 mph air-speed on a calm day for 10 minutes (that's a long and game-changing spell in most systems), that's only 5 miles.